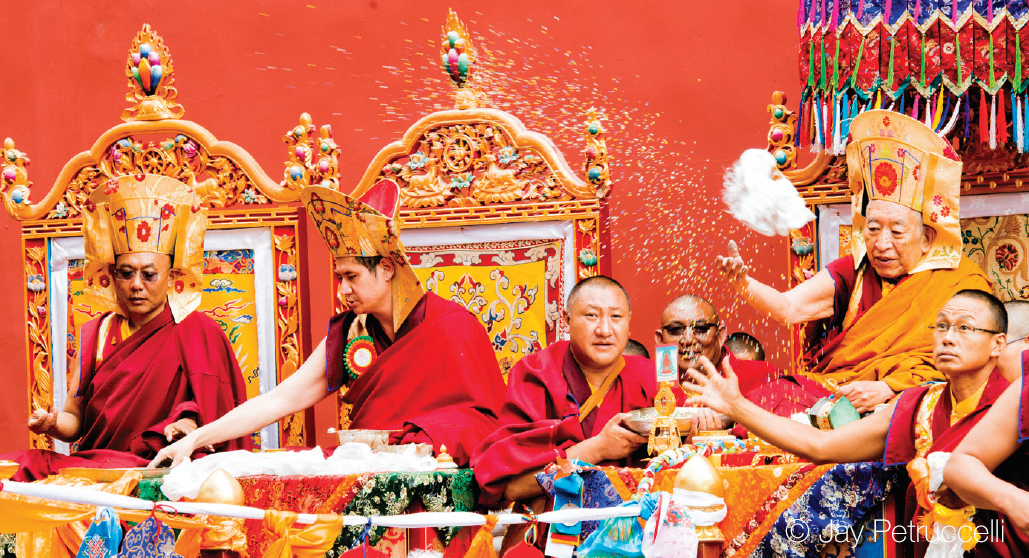 Tibetan Buddhism is centered around the notion of transmission, the passing on of teachings and methods from the teacher to the student, who in turn hands on the teachings to his own students, it is this that has given rise the understanding of lineage, the threads of descent of Dharma wisdom from one great master to the next.

It is these masters, or those referred to as re-incarnate lamas, who are the holders of the transmission during the period from the death of the reincarnate to the coming of age of his next incarnation.

The Karma Kagyu school of Tibetan Buddhism, sometimes called the whispering lineage, is an example of one such lineage, it is spoken of in this manner not because the transmission is whispered from the teacher to the pupil, but rather in reference to the continuity of verbal transmission to a select number of high caliber students.

The Karma Kagyu lineage is the yogic transmission amongst the four main schools of Tibetan Buddhism, it encompasses both the old (Nyingma) and the new (Sarma) teachings which reached Tibet.  This is a lineage known for being (meditation) practice orientated, The Kagyu is called the oral or the perfection school.

The origin of the Kagyu lineage dates back to the ninth century at the time of what is referred to as the full flowering of tantric Buddhism in India.

The first of the Kagyu masters is known as Tilopa who received direct transmission from Dorje Chang (skt. vajradhara) in turn Tilopa gave the whispered teachings to Naropa, in turn these were transmitted to Marpa, the translator who in turn continued to gift them on to Milarepa, and from Milarepa to Gampopa and in turn to the First Karmapa Dusum Khyenpa (110-1193)

Therefore it can be said that the Kagyu tradition is a blend of both the esoteric (tantric) which embodies the Mahasiddhas and the systematic and structured paths and stages of the more strict discipline, which were brought together by Gampopa, so it is this union of discipline and total freedom that characterizes the Kagyu tradition.